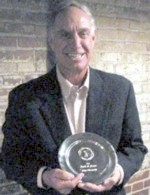 After a successful college career at Duke University, which included him winning the ACC individual championship in 1962 and serving as team Captain in 1963,  John came to Lancaster in 1964 in the capacity of Assistant Professional at the Lancaster Country Club.   After only a year at LCC, John was named Head Golf Professional, a position he would hold until leaving in 1994. During his tenure at Lancaster, John was a prominent fixture on the course, winning the LANCO Open in 1974 and 1981, the Individual Championship at  the International Four Ball in 1966 in Scotland, and qualifying for 4 PGA National Club Professional Championships. In fact, he still holds the LCC course record of 63, set in 1985.

His impressive playing legacy is coupled with his immense influence on the Lancaster County Golf Association, which he presided over as its President from 1966 through 1994. During these years John was the primary catalyst for the organization that oversees and operates all of the LANCO Championships and tournaments. He spent countless hours not only running and organizing the association but helping it grow to the place it is today. In many ways John Abernethy was the Lancaster County Golf Association for almost 20 years. His induction into the Lancaster County Golf Hall of Fame is in recognition of his unique level of excellence on and off the course. John went on to serve as the Head Golf Professional and Director of Golf at Debordieu Golf Club in Georgetown, SC from 1994-1997. Following that he organized Corporate Golf Outings and Events for Forbes Inc. from 1997-2007. Currently he resides at Belfair in Bluffton, SC. Through all of this though he and his wife and family still consider Lancaster home.